Supply Chain Management at Warp Speed: Integrating the System from End to End 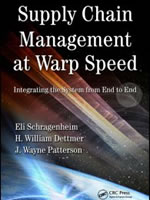 Drum-Buffer-Rope and Make to availability

Supply Chain Management at Warp Speed: Integrating the System from End to End Supply, the sequel to Manufacturing at Warp Speed, is the first book to describe, in detail, the application of the TOC approach to assured availability in distribution, for both original equipment manufacturers and retailers.

The book refines and updates the former approach to production management with new ideas and integrates the Theory of Constraints (TOC) method for production, from make-to-order to make-to-stock and make-to-availability. The book presents the TOC approach to distribution and explains the TOC vision for managing the whole supply chain.

Fully illustrated, with numerous examples, case studies, and manufacturing scenarios, the book provides TOC practitioners with the tools needed to address the performance issues of the entire supply chain and develop solutions that represent a win for the end-user as well as for stakeholders along the entire supply chain.

You could call this book a sequel. It’s neither a new version of Manufacturing at Warp Speed, nor is it a re-write of the book. The world continually changes, and production management is no exception. This book continues and broadens the scope of the earlier book’s the material, but it updates and refines the former approach to production management. It also complements earlier production management tactics with new ideas. Most important, however, it integrates manufacturing, distribution, and raw material management into a single end-to-end supply chain. Human action naturally tends to conform to existing paradigms. We’re already heavily invested in these paradigms, and often we have insufficient capacity (or stamina) to challenge them all. Moreover, not every change is an improvement. New thinking—thinking that challenges existing paradigms—also faces one serious inherent obstacle: it’s not clear when traditional thinking should stop resisting and just accept the new paradigms. Once we do challenge existing thinking and settle into a new understanding, should we move on in that new paradigm without further digging? And should we elect to dig deeper, and subsequently discover some “new wrinkles” in the new paradigm, how easy is it to elicit acceptance of such refinements? It’s not unusual to fight the same battle all over again. Moreover, when we embrace a new procedure, one that we may have dedicated a lot of thought to, it’s possible that it is not the best one. There’s a lot of emotional pain in realizing that for years we’ve done things in a flawed or incomplete way. Then there’s the question of how long any new insights will continue to be relevant.

Throughout the 1980s and most of the 1990s, TOC focused on the optimization of an internal constraint. The rationale for doing so was that if the system constraint was within an organization, its performance would be more easily controlled. Consequently, the main objective became improving internal operations (focusing on the weakest link, subordinating everything else to it). The well-known concept of throughput-per-constraint unit (T/CU) is based on having an internal constraint, but even this invaluable metric creates inertia. For example, T/CU is used to guide decisions even when the weakest system link is not a production constraint. For major decisions that might shift an existing constraint, T/CU is clearly not applicable. Even worse, T/CU is often misused in operations to better “exploit” an internal constraint by delaying orders with lower T/CU, frequently violating the company’s commitments to the market. This is a sobering example of how what seems to be a good new insight might actually turn into the next flawed policy. And it happens because inertia discourages questioning whether the assumptions behind the policy are still valid. In Manufacturing at Warp Speed we proposed the idea that the market is always the major constraint. So, even if a company’s weakest link is a capacity limitation, that capacity-constrained resource (CCR) must still be subordinated to the market. If you lack enough capacity to satisfy all customers, at the very least you’re obligated to tell your clients what, exactly, you will commit to providing. And when you can’t commit to a customer’s request, the ethical thing to do is to advise customer of other options (yes, we do mean going to a competitor!).

When Manufacturing at Warp Speed was published, we suggested that enterprise resource planning (ERP), which is based on an old—and definitely flawed—paradigm, required manipulation to effectively support Simplified Drum-Buffer-Rope (S-DBR). In the intervening years since then, we’ve concluded that this is no longer a valid assumption. Since 2000, dedicated S-DBR and distribution software packages have been introduced.

Describing these software applications is beyond the scope of this book, but suffice it to say that effective application of S-DBR isn’t constrained by existing ERP packages any longer. At the end of this preface you’ll fine Internet links to websites where additional materials are available, including in-depth examples of existing TOC software modules that support the ideas presented within the book.

New in this book is the subject of using S-DBR for making to stock. Manufacturing at Warp Speed was all about making products to order. But how do you manage demand that is based on promises of immediate availability, especially when the deadlines for these demands is shorter than the shortest manufacturing process? This book also introduces a new subset of making to stock that we refer to as “making to availability” (MTA). Properly applied, MTA has the potential to afford a producer a significant competitive marketing advantage.

Another related concept we challenge in this book, one that TOC was originally based on in the 1980s, is that the term buffer always means time. Time buffers have been used in TOC applications through the 1980s and 1990s, so how do we dare to challenge that? But when it comes to actually making to stock, we need to reconsider our tradition concept of buffers.

Making to stock naturally leads us to analyze how we manage that stock—or rather, product availability. We describe the TOC approach for managing post-production distribution in detail. And this naturally leads us to the question of managing raw materials. The net result is a fresh look at the supply chain as an integrated system—all the way from producing the base materials to the end consumer. We are convinced that TOC has a profound vision for managing supply chains—and this approach has the potential to overcome major undesirable effects that exist in supply chains today.

This new approach to coordinating production with the market that we introduced in 2000 in Manufacturing at Warp Speed has since been adopted by many practitioners of the Theory of Constraints (TOC), including Eliyahu M. Goldratt. So, this book should be looked upon as a sequel to Manufacturing at Warp Speed. All the ideas inherent in that book are still valid. But with the passage of time, new insights and perspectives have evolved, and we’re sharing them here.

The last thing we want to see is people stuck in a new kind of inertia. It required time to overcome the inertia of the cost world and move into the throughput world. Likewise, we’d prefer not to simply stagnate in the first notion of what throughput world really means. This book advocates moving forward into the next paradigm.

How to access this eBook using the new TOC Reader

Select your desired content, then press the button "Save to device", accept the license agreement, and your content will start downloading, wait until the download ends.

When the synchronization completes, the app will show the contents of the file.